Vincent Corazza (born December 6, 1972) is a Canadian-born actor best known for playing the role of Alden Jones in the television series Braceface and Darien Shields/Tuxedo Mask in the anime Sailor Moon. Corazza began acting at the age of 10. He appeared in both leading and supporting roles in over 100 films, television shows, movies of the week and commercials combined. His credits include the 2003 feature film, Owning Mahowny in which he played the best friend of Philip Seymour Hoffman, as well as the television movie The Cheetah Girls for the Disney Channel. Other credits include guest appearances on The Famous Jett Jackson, 24, CSI: Crime Scene Investigation, JAG and Without a Trace, and a December 2006 appearance on the daytime drama General Hospital. Along with his film and television career, Corazza's vocal career has spanned two decades. He has lent his voice talents to over 1000 radio and television commercials. Notable vocal/animation credits include Alden on Braceface, Tuxedo Mask and Alan of Sailor Moon, Sam Sparks of Rescue Heroes and Shickadance of Ace Ventura: Pet Detective. He was also the voice of U.B.C.S. mercenary Carlos Oliveira in the PlayStation video game Resident Evil 3: Nemesis, and the voice of Zexion in Kingdom Hearts Re:Chain of Memories and Kingdom Hearts 358/2 Days. Corazza played the lead animated character of "Slim" in an IMAX feature entitled Adventures in Animation 3D. Corazza also had a role in the horror movie Bless the Child. Corazza has recently branched out into theatrical acting. He has acted as Harry Bright on the US National tour of Mamma Mia!, and also was a part of the original Broadway production of Rocky in 2014. In 2015, he took on the role of male lead in Music Theater of Wichita's stage adaptation of Big Fish (July, 2015). Corazza plays the part of Edward Bloom, a father who raised his son on fantastic and exaggerated stories. 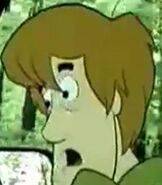